We were asked by a customer  to extend the analysis functionality of ThreatConnect to other SOC personnel that didn’t have direct access to the Platform. So we did. This Playbook creates a new process in which non-ThreatConnect users can get on-the-fly analysis and context into potential hash IOCs they’ve encountered, and simplifies the process of using the Threat Intelligence team as a conduit for another team to do analysis.

The Playbook is triggered when an email with a list of file hashes in the body is sent to an inbox. The mailbox trigger outputs the body of the email to a regex extract step, which pulls all of the included files hashes out and stores them within an array output variable. That array is passed through the main iterator, where the majority of the Playbook logic takes place. The larger concept here is the use of an iterator operator within another iterator. This is because there is a list of file hashes submitted for analysis, and each individual hash could have its own list of owners within the Platform; thus creating a potential for an  array within an array situation.

The main iterator will perform the following steps on each file hash within the array extracted from the email: First an API call is done to the /owners endpoint to get a list of owners within the ThreatConnect instance that contains the singular hash as an IOC. Once that list is compiled, a JMESPath query will extract all of the owners and pass that as an array to a secondary iterator. This iterator is more simple in nature, as all it is doing to looping through the list of owners and substituting each one within separate API calls to the hash value, but now using the ‘?owner=’ query parameter to gather all relevant information on the hash from each source that owns it within the Platform. The secondary iterator is then closed when this is finished, and the result is an analysis listing for each owner for the single hash value that is an output array from the iterator. This array goes through a quick JSON formatting step, and then to an if/else statement. If the data contains a failure message (meaning no results were found in the previous steps) then it takes the ‘false’ path out of the if/else statement and simply logs that no details were found for that hash. If there is no failure message, it will then take the ‘true’ path out of the if/else to a component.

This component is essentially a series of if/else steps that are checking for the IOC types that we define within its input configuration. Once the respective if/else statement hits a true statement, it will exit to its respective JMESPath query and extract the appropriate data relative to the indicator type. In this case for file hashes, there is subsequent checks to determine what type of hash it is. This is then returned to the component trigger, and outputted as a variable for use downstream of the component in the larger workflow.

In this Playbook’s current configuration this step isn’t necessarily needed, as since we are solely dealing with file hashes – we could have hard coded the hash related JMESPath query instead, but having it does offer the flexibility in the future to leverage other IOC types in this workflow without having to drastically change or add to the logic.

This final result is passed back to the original iterator, thus closing the loop on this first pass on our list of hashes where the result is stored at index 0 of the iterator output, and the entire process repeats again for the second hash in our original email list.

Once this array of results is completed, the main iterator will output the results to a series of formatting steps, and then finally out to a Send Email Playbook app that will send an email containing the results of what the customer’s ThreatConnect instance knows, back to the original sender.

How to Set Up this Playbook: 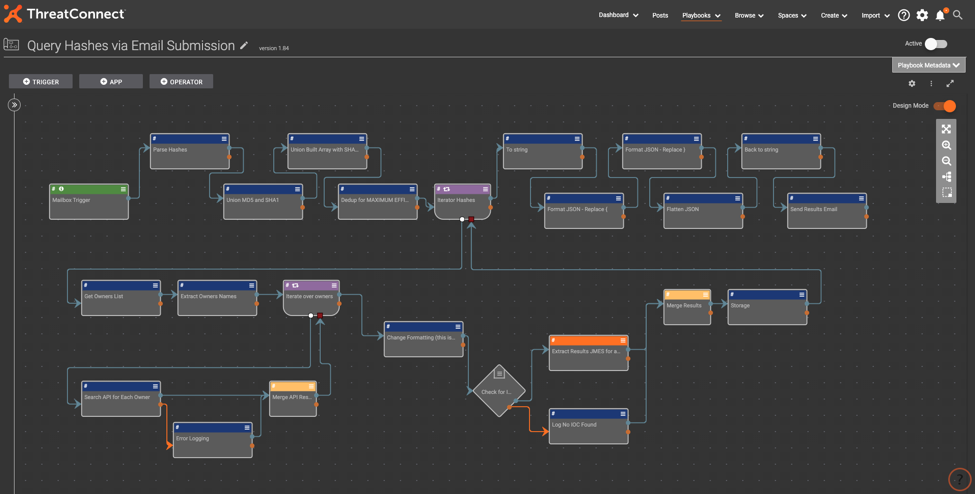 See this Playbook on Github.