When automating processes, you may run into situations where you need a human to be part of an automated process

The whole goal of Playbooks is to make it easy to automate tasks so you can be faster, more effective, and more secure. When automating processes, you may run into situations where you need a human to be part of an automated process. This blog post introduces a Playbook system you can use to create processes which include human review or validation in the middle of the process. If you just want to find more information about the system, you can find links to the system’s documentation here: https://github.com/ThreatConnect-Inc/threatconnect-Playbooks/tree/master/components/TCPBC-CT-Human%20in%20the%20Loop . If you just want to import the Playbooks and start exploring, you can jump to the “Setup Instructions” section near the end of the blog post.

If you’ve made a habit of automating processes, you will soon realize that a number of processes require some human involvement. For example, let’s say you have an incoming stream of phishing URLs reported by your employees or customers. Each reported URL is sent to a Playbook that creates an Indicator in ThreatConnect. For each reported URL, you want to create a task for an analyst to investigate the URL. If the analyst thinks that the URL is not malicious, the process can stop. If, however, the analyst determines that the URL is likely malicious, the threat and confidence ratings for the URL should be increased and the URL should be sent via Playbooks to a firewall. The difficulty is that you need to have a human in the middle of the automated processes. You want a workflow that looks something  like:

What would it look like to design a system for handling this type of process with Playbooks in ThreatConnect?

To understand how to solve the problem, take another look at the diagram above. The difficulty with a process that sandwiches human interaction between automated processes is not really in part 1 or part 2 of the automated process (building automated processes is easy with Playbooks) nor is it in the human review/validation step. The challenge is the arrows that connect each step together. We need to:

In a sense, we are automating (as much as possible) the connection between human and automated processes. So what does this look like in a Playbook? To demonstrate how this works in a Playbook, we’ll walk through the example Playbook here. There are instructions for installing and setting this system up later in this blog post; for now, you can just follow along.

Closeup of the “Value Lookup” App 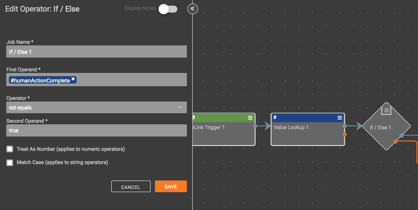 Closeup of “If” Operator

As you can see, at the end of the upper line there is a component named “[Human-in-the-Loop] Create task 1”. This component will create a task in ThreatConnect and record the link to the current Playbook in the datastore (which will be important later). As such, this component takes two arguments: the name of the task which will be created and the link to the current Playbook. So the upper line is executed if a certain header is not present and will run the “Logger 1” app and create a task using the “[Human-in-the-Loop] Create task 1” component.

The lower line in the example only contains an app to log a value, but in a real-world scenario, you would build out the process which should be executed once the human interaction is done. The basic structure of the playbook is something like this:

Let’s remind ourselves of what we are trying to accomplish. We are trying to build a system that allows us to sandwich human interaction between automated processes.

To do this, we determined that we need to:

The upper row of the example playbook we walked through achieves the first requirement: letting a human know when he/she needs to do something (the component on the end of the last line will create a task).

Now we need to consider the second part: how can we kick off another automated process (which would exist in the lower line of the Playbook above) once the human interaction is done? This capability is enabled by the “[Human-in-the-loop] Complete task.pbx” Playbook. Once imported and activated, this Playbook provides a user-action trigger on tasks that lets a user complete the task and kick off the next step in the process. If you recall how the “[Human-in-the-Loop] Create task 1” component works, it creates a task and stores, in the datastore, the link to the Playbook that should be called once the task is finished. Now, when the user completes the task using the “[Human-in-the-loop] Complete task.pbx” Playbook, this Playbook completes the task, finds the correct link in the datastore, and requests the link. When making this request, it includes the special header that executes the lower path of the Playbook. All said and done, the human-in-the-loop system can be summarized as in the image below.

So how do I use this system? There are links to the human-in-the-loop system’s documentation here. To setup the human in the loop system:

As always, if you have any questions, please raise an issue and thanks to all of those who have contributed to our Playbook repository!